The Hunt (the final entry) 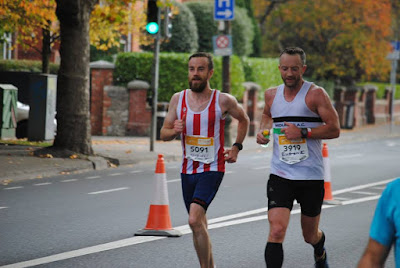 Injury aside I had come into the final few days in good form. I had been happily reconciled with the fact that my taper, which had been heavy on rest and light on miles had allowed my body to recover from what had been a very intense window of training where miles had increased steeply. I had started to feel my calf again but was confident to put this down to phantom pains and my body losing a little flexibility that would come back on race day. I had carried a water bottle around with me like a fifth limb and was happily hydrated. I ate well and my little girl Esme had given me three uninterrupted nights of sleep. Even on the final night before the marathon the wake up I got from her and the party across the road (a first since we’ve moved here) was only temporary. I moved into the spare room and the extra hour of daylight meant that I slept a sleep of kings. Finally, the weather was ideal with the only complaint being that there could be no complaints with the weather. It was dry, not humid, with no wind. Perfect. So, all things considered I couldn’t have been happier.

As for the race then I had my plan and I stuck with it. I began ahead of the 3-hour markers knowing that they always start off fast and would soon spill past me thus giving me a marker to aim for later in the race. This they did just before mile 3. Despite their wave washing over at the most inopportune time – the first drinks station – I managed to tag a water and with that began my feeding.

I had been told, backed up through my experience, that you need to take on food and drink early in the race. The longer the run goes on the less likely you will want to take on food until finally it’s too late and you’ve hit the wall. So, a gel and half a bottle of water at 5 k is followed up by a banana and bottle of water mixed with a Dioralyte I take from my parents at 10. A Dioralyte is an oral rehydration sachet that does much the same job as an isotonic drink except with less sugar and fancy packaging. I’ve had a lot of Dioralytes over the years from when I lived and travelled overseas and after bouts of gastro-enteritis. I’m hoping that there will be none of the gastro-enteritis today.

This routine of gels and water continue up to the half-way mark with water also been used to cool the head and the thigh muscles. It is not really hot but anything to lower the body temperature a little I think is good.

At the half-way point I am almost a full minute down at 1 hr 30 mins 58 seconds. While everything has gone to plan I am not that happy for three reasons.

1.      The first is that aside from running in a serene Phoenix Park during our re-entry, so beautiful the morning is, I don’t feel I’ve been running fluidly at all. I thought by going a minute over the 1 hr 30 mark, a full 8 minutes more than my half marathon PB, would have been feeling fresh.
2.      By the time I actually hit the official half-marathon marker my watch is reading not 21.1 but 21.4 and I realise that every estimate from here on in, which is hard to do when you’re running, will have to remember this.
3.      And finally, my heart-rate monitor continues to read MAXIMUM. Having gotten a lovely new Garmin that has a wrist heart rate monitor that goes from Warm Up, Easy, Aerobic, Threshold to Maximum everytime I hit my 3 hr race pace of 4.15 it hits MAXIMUM.

Consequently, as I pass the half-way marker I decide two things, one is to fuck the heart-rate monitor. I don’t feel great but I don’t feel terrible either so if I blow up I blow up. Two, maybe marathons are not my thing after all.

All the way along Crumlin towards Walkinstown I keep moving steadily taking my third gel and some more water. Shortly after the Walkinstown roundabout I meet my sister and niece for my second and final banana and Dioralyte station. I eat half the banana and drink a third of the Dioralyte, give them a smile and keep going.

And then three kilometres later something special happens. I suddenly feel good. A purple patch down the beautifully paved Templeogue Road heading for Terenure. I first sense it when I realise that I actually recognise my surroundings, something I have generally been unable to do in past Dublin marathons when I reach the 17 and 18 mile marks. In the past I’ve just been looking for the markers trying to count them down. However, now I am looking at streets and roads I have actually driven on. Then I cop that I am starting to pass people a little more easily. And finally I feel like I am not really noticing the time. Later I will see that my kilometre times from 25 k read 4.12, 4.12, 4.12, 4.12 before at 29 k I can no longer hide my desire to start pushing and hunting the red balloon of the 3 hr marker that is becoming increasingly visible in the distance.

Suddenly the hunt is on and while I am not thinking of sub 3 I am thinking of attacking. 29 k is a 4.09, 30 k a 4.06, 31 k a 4.02, 32 k a 4.07 while 33 k knowing I have less than 10 to go is a 3.59! At this stage I’ve joined forces with Eugene from Middleton County Cork. I hadn’t really realised but I have been running with him since the Cahpelizard fly-over but it is only in the last 14 k that we both see that we are both moving at the same pace. An observation ‘you’re running well’ and a question, ‘have you ever broken 3 hrs before?’ confirms that we are running in tandem now and fighting together. There are Eugene’s in every race and if you find one it is important to hang on to them.

As we hit Clonskeagh and the beginnings of a long drag that will finish with Heartbreak Hill we are on each other’s shoulders keeping the tempo going. At this point while we are passing more and more runners we are starting to feel the pain 34 k in 4.12, 35 k in 4.15 and 36 k in 4.19. We have some 6 k and a bit to go and all of a sudden the sub 3 is on, even if I still won’t allow myself to believe it. I know that my distance clock is off and I know that it might be tight so all I can do is keep on going.

We take off down the hill from Heartbreak and burn the next 37 k up in 4.04 before turning onto Stillorgan and the almost run for home and 38 k in 4.06. God knows what my heart-rate monitor is thinking now but feck it, keep on moving. At one stage Eugene drops a little behind me and I call back to him ‘C’mon Eugene, I need you as much as you need me’ and he pulls back up to me and we pile over the UCD fly-over back down onto the Stillorgan Road before shooting down Nutley Lane where he drives us forward, 39 k in 4.08.

As we turn onto Merrion Road he swears that we better not let this slip now. Close up ahead are the 3 hour balloons with only a few remaining runners with them, either because they’ve sent their group on or already burnt them off. The shouts from Trim and Middleton A.C. supporters grows. The toughest k comes at 40 when it is still too early for the mind to think that sure you’ve only more than a mile or a couple of k to go but the body is now beginning to burn. All around us runners are tiring and slowing and cramping and cursing. It feels like I am running through a collage of early marathons with past versions of myself sprawled along the road. I recognise in the pain of the faces of those whose times are now beyond them myself in every one of my past five marathons where I have really gone for sub 3.

Today though, it is within my grasp. I can’t let it slip now. I am not sure if it is the enthusiasm or the fear that starts to drive me forward. I push past the 3 hour balloon 41 k in 4.07. Eugene starts to drift a little back though he still is moving. I guess he knows he has it in the bag at this point. I refuse to believe. I hit 42 k in 4.09. It is only then that I start to see the 800 metre to go marker, the 400 metre to go marker. It’s hard to do Maths but even still I look at my watch and know I can run 400 metres in less than 2 and a half minutes.

Epilogue:
I put the time up later on Facebook and for the first time in my social media life I actually give it a Like. I think I deserve that.

Then, to everyone; to my wonderful wife and beautiful little girl. To my family who’ve lived the past highs and lows and fuelled me along the way. To Trim A.C. To the crowds of friends and strangers. To the Eugene’s. Thank you.

Finally, to those who it didn’t work out for this year, don’t give up. The marathon is a beast. It killed the first person who ran it all those years ago in Greece and he finished not at 26.2 miles but at 26. Every year it doesn’t give in without taking plenty of runners out with it. Believe it from someone who knows. Don’t feel guilty or down that it didn’t happen. I mean crying as I was being stretchered into a first-aid tent in Edinburgh 2011 because I let my parents down? What’s that all about? Things can always be worse as the guy beside me who was running the wrong up that street can also testify to. Although this might come as cold comfort at the moment. Marathons that don’t work out leave you raw, as well as blistered, and unable to walk down a stairs front-ways like the rest of us. Recover, treat yourself and go again.

(Thanks Ciaran for the photo).
Posted by ronanmoore at 5:20 AM