The Changing of the Seasons

One thing I miss about not being able to run is the heightened awareness to the changing of the seasons that running gives, visible in three distinct ways:


Temperature: While mid-July does not guarantee high temperatures and unending sunshine, generally speaking from May onwards the days gradually warm up until October heralds the gradual cold descent. Of course all this is done rather schizophrenically with plenty of exceptions to each but generally speaking you won’t need your under-armour in July or your sunscreen in December.


Light: From the clocks going forward in March to the clocks going back in September Irish summers are marked by long evenings and beautiful daylight. There is nothing nicer than coming home for a run and noticing how the day is growing longer allowing you more and more time to get ready. This continues unabated until mid-June when taking off at 10 at night for a short run in the country-side is not a crazy idea at all. Of course, by the end of September things begin to run the other way like an egg-timer near-empty. Driving home you see the window of day-light shortening each evening until only the street-lights allow you out. 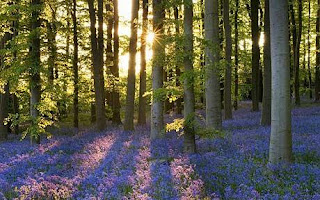 The Hedgerows & Fields: This final one is my favourite. As the year progresses from winter onwards week on week the hedgerows and fields begin to wake up with regular arrivals of flowers, plants, and flowery plants. From the snow-drops that lead the way like Kenyans in a marathon to cowslips, mid-June fields of golden buttercups to the general hoi-polloi of daisy’s and dandelions, which turn from yellow to green to feathery.


My own personal favourite were the bluebells in the forest runs at Carton House in Maynooth that opened up each spring and were soon followed by the clumps of wild garlic that would greet you before you even got within sight of them.


Anyway, that’s enough of the sentimentality crap. Tomorrow we’ll talk about that other seasonal companion, the midge.

Posted by ronanmoore at 1:44 PM