Most runners have a regular route they run more often than not. With the need to put away many, many miles before the marathon a weekly training schedule is often dotted with days of shorter slow runs. And many of these short outings are often on a regular route that thus becomes the bread and butter of a marathon training regime. 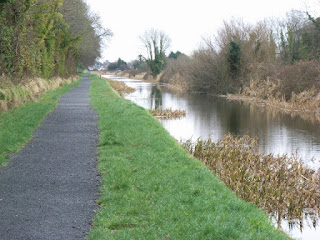 For some these runs are along town ring-roads, local woodland trails, park routes or a nearby field. When I lived in the town of Maynooth my habitual lope was down the canal paths. One direction brought me in the direction of the lovely environs of Carton House, the other aimed towards Kilcock with equally pretty old canal bridges en-route. The Kilcock route for some strange reason always reminded me of Normandy, even though I’d never been to Normandy! When I moved to Navan I used to go to the Hill of Tara. While this circular lap could not have been more historic the camber or slope throughout coupled with the long ups and downs meant it wasn’t as pleasurable as I would have liked.


When I came back to the town of Trim a year or two later the “Five Fingers” as I used to call them became my regular series. These “Fingers” were the roads leading in and out of the town, which I would run up and back as far as the wide town path would take me – Kildalkey Road – Athboy Road – Navan Road – Dublin Road and the Summerhill Road, at least to the roundabout. The Kildalkey Road was the shortest route and what I called the thumb while the Navan Road was the middle finger and longest section. In the summer-time the bright long evenings opened up what we called the Porchfields, two large green spaces in the centre of town. However, in the dark of winter it was always the “Five Fingers” for me.


Eventually though I moved a little out of town and I needed a new route, and this is where I settled for my new reliable, the 7.5 km up and back down the Rock Road to Jack Quinns. It’s a course that I could now run blind. Cross the busy country road, up and over a small brow heading down past a small stream before rising a little the first kilometre mark where a new house has been built at a fast bend where a pot-hole annually seems to give out.


Then around two twisty bends, one twistier than others where an ear must be kept for oncoming traffic. Once negotiated the road straightens out with several nice houses alongside it. One of these is populated by a town of gnomes and defended by two ridiculously huge dogs who respect the white-picket fence that stops them from going out and make sure that everyone outside respects the picket fence and don’t come in. My wife tells me this whole place is called Dogtown and this second kilometre explains why.


The third kilometre takes some long bends and fine fields with various crops and livestock. You can see the 14th hole of local golf-course on one side and horses galloping free on the other. This kilometre ends at the point where my local school bus used to turn up for the country-side route to my primary school.


The last half kilometre brings you down to the Dublin road, which every town in Ireland seems to have. You know it’s the Dublin Road because Jack Quinn’s pub is on the corner helping give directions to visiting friends for years, “when you see Jack Quinns, turn left”.


At this stage you do one of three things. You head left for town and a longer 12 k loop or stagger yourself across towards Bective for one of those long, slow ones. Or more often than for me, I turn and do it all back again, heading for home and the ticking off of one more group of miles ran.


While I have never actually done it well, I’d like to think one day when I run the perfect race I will hit 3 and a half kilometres to go and as well as taking in the remaining distance I will be brought back to this regular route and visualise each and every twist and turn as I finish the 42+ k, remembering just how much effort has gone in. That would make me smile.

Posted by ronanmoore at 3:11 AM