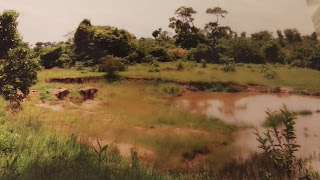 I think it was in Africa I first began really running. Africa sounds like a great pedigree of place to begin running except I was less Rift Valley Kenya and more Middle Belt Nigeria. Nigeria is a great place for many reasons – the gregarious-natured people, the warm evening African sunshine, the pounded yam and the ice-cool Star beer and I loved living there. However long-distance running fell into the same category as progressive tax systems, corporate transparency and road safety as things Nigeria doesn’t really do. So it was a little strange that my slow love-affair with running began here but begin it did and much of it was down to my first running-buddy, Amy.


Amy was an Irish-Italian American from Boston who worked for the U.S. charity I was seconded to. She loved animals and she loved running, and quite often she would take her friendly black Lab Chloe for a run early Saturday morning before the sun got up. For a long time, I couldn’t understand why? I mean what else would anyone be doing on a Saturday morning but sleeping on from a late night and/or nursing a slight hangover. Something that happened quite a lot following the weekly weekend revelry down at the Village Bar. But eventually one Saturday, and not because the Village Bar was closed, I joined her for a run.


We must have only ran for 5 or 6 kilometres at most but at a dam and its sub-Saharan semi-tropical feeling surrounds I actually kind of enjoyed it! And a few weeks later I came back. And a few weeks after that too. I’d be lying if I said I continued to run every Saturday morning. The Friday nights at the Village were often just too much fun and occasionally the dry and dusty Harmattan wind that carried down Saharan sand made the runs a little too er… coughy. But it was on the fringes of Bwari Dam 30 kilometres from Abuja that my running career began.


When Amy and co. left for the U.S. there was a good chance that my budding running life might have ended but one Friday night I met Mikko, a Finnish embassy worker. Tall, blunt, with a black sense of humour that wasn’t immediately evident, a surname that was immediately difficult and a fondness for a few full-bodied drinks at the end of the night he fulfilled many of the stereotypes you might expect of a Finn. He was great craic though and he also ran.


So swapping the greenery of Bwari dam for the proximity of a nearby quarry in the Asokoro district of the Nigerian capital we met up on a regular basis for midweek evening runs, which had two great outcomes – it didn’t affect the weekend’s merriments but did make running a routine.


If Amy and Mikko fostered a love of running, it was concretized when I returned to Ireland. During a teacher-training course in Maynooth University I met Dave who I quickly discovered shared a few commonalities with me:

·         And we both would appreciate someone to run with to help overcome the dreadful monotony of miles that novice runners have when travelling solo.

That Dave lived in Dublin in warm-up distance from the Phoenix Park and in an apartment complex that had a communal gym and Jacuzzi that we could use for free after our run was even better!


So over the next nine months we began to regularly jog around the Park or canter along the canals of Maynooth until one day, running was just something we did. After that there was just one more thing to do, run a marathon.


Will meet the physio tomorrow and hope for positive news.
Posted by ronanmoore at 1:08 PM