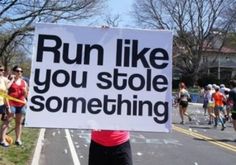 Of all the things that help marathon runners keep going during races, perhaps the most personal are the partners, families and friends that come out whatever the weather or the time to cheer you on. I always found the roadside support one of the most fascinating things about running. I could understand why people ran, but why people came out to cheers those who ran at first escaped me. It was only when an injury one year kept me back from running and instead saw me out supporting a friend along the streets of Dublin that I realised that you can’t just cheer your own on, it’s damn near impossible. Everyone is in the same both as each other so in the end you cheer everyone on, or at least I did.

I’ve been lucky to have had some great people come out to urge me on but some standouts include:

My wonderful wife Frances who not only has endured my running but with my mate Steve criss-crossed Dublin one year avoiding traffic-jams and diversions with fluids and food for me over at least three or four stops. No easy thing.

My parents who’ve been at so many of my runs, some good, Cork, some bad, Edinburgh. My best memory of them was my second marathon when I organised to meet them at a bus shelter near Hanlon’s corner about 4 miles into Dublin. I wanted them to take a photo of me and gave them the position and the time. However just as I arrived at the junction I could see them with their backs turned still approaching the bus-shelter. I shouted to them as I came near and only at the last moment did my mother, et camera, hear me. Instead of turning and trying to snap however she decided to run ahead, not really thinking that I was in the process of running too! It was a somewhat futile effort and when she turned to see how much she gained I was pretty much jogging on the spot beside her. As I continued to jog-super slowly, she did get the shot, even managing to get the early morning sun over my shoulder too.

My siblings, particularly my sister Maria and her kids, who were responsible for the first ever drawn poster wishing me well. “Come on Roro!!!” in beautifully colourful crayon.

My mate Paraic. Despite not seeing me at Edinburgh (we’ll get to that) he was there for me in Cork doing the sums at one stage and with the resources at another. He even forgave me just after Heartbreak Hill in Dublin when he offered me three types of drink to choose from only for me to grab the most expensive one, spill half it on him, take a mouthful before chucking it onto the ground.

My mate Podge who fought a hangover to get out of bed and her me say around the 22 mile mark in Dublin, “I feel shite”.

Our friends David and Laura from Spain and France whose enthusiasm in Sevilla with “go on guy!”, “Well done”, “You can do it”, gave me the briefest of respites as the final 7 or 8 kilometres kicked in.

Trim A.C. My club whose members cheer us all on, whenever they see the red and white strip of Baile Atha Troim

However perhaps the best award, or at least some sort of award has to go to Samantha and Colette, who joined Dave and I in Berlin. Having organised four places to see us with drinks and bananas they went out for the night while we retired to our own apartment. Then the next day because we went through the first two stops a little bit earlier than planned (and they may have been just a minute late, maybe) we missed each other. At this stage they sagely decided to skip the third stop to ensure the last. But of course at this stage our wheels had fallen off and when we had failed to arrive 10, 15 minutes after we said we would they figured they must have missed us again and left for the finish. Come a few hundred miles to cheer us on and we didn’t see each once. Still it’s the intention that counts, we met them for dinner and they had a one hell of a Friday night.

To all those supporters and everyone else, I and we thank you.