And now for something a little bit different 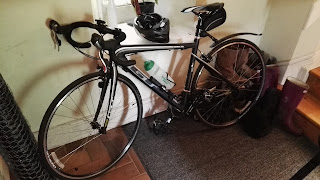 
I used to play football when I was younger. Loved it. Eventually though, the injures built up and I found myself spending more time at physio, on an operating table or in rehab than I spent on the pitch. I had a brief renaissance with an over-35 football team last year, scoring more goals than I ever scored in my career and remembering with gusto what it was like to slide in and tackle before more trips to the hospital reminded me of why I retired and I returned to running.


Running is less destructive to the body. You generally don’t have to worry about someone swinging an elbow in your direction, clashing heads in the box or being taken out from behind with a two-footed lunge, not usually anyway. As a result, there are many I know who having spent a life-time kicking ball around a pitch retire and then realise that their body isn’t ready for just stopping and standing still. And this is where running comes in.


However, it is tough though and those miles and miles of running do add up and sometimes catch up with you. So while the injuries might not be as brutal looking as a bloody nose or stud marks down the thigh, they can come and for some, if they come too often then running can be called time on too. And this is where cycling arrives in. No continuous impact. No knee complaints. No thigh issues. Just a little soreness around the backside as the buttocks settle into the saddle and maybe a stiff neck from a brand-new sitting position.


I haven’t retired from running just yet. However, in the absence of mileage on the road as my leg recovers I need to do something to get the lungs going and cycling is just the ticket. I just need to get a little push. Bike and gear aren’t the issue. I bought those more than a year ago, along with half the country in the bike-to-work scheme, but after a staff cycle the tyres had gone flat from lack of usage! They have been pumped again a few weeks now but the bikes has remained sitting like a substitute in some U.S. sports movie staring up at me and shouting, “put me on Coach!” I finally decided to do so last night.


I met the neighbour Ray race-dressed and warming up outside. Asking him if he minded me joining him, fifteen minutes later we were on the road. Trim to Kildaley to Athboy to Kilbride to Trim and home again, eating miles so much quicker than I would had I been running, even if I was bringing down Ray’s average pace a few kilometres.


It is a real tonic having spent the last week or more doing feck all. So much so that when I realised that when Ray said he was going out for 40 or 45, he meant kilometres not minutes, I didn’t mind that I’d be on the road for an hour and a half so content I was just to be out doing something.


Like I said, I haven’t retired from running just yet, but at least it is good to know that if I ever did there is something else that might take its place.

Posted by ronanmoore at 4:34 AM