“Every setback has a silver lining. You just have to find it.”


"Carlsberg don't do running related injuries but if they did…"

I was at the physio yesterday and the news is good. Touchwood. I can start running again. But before that something about physios.

Physios are like doctors, dentists and mechanics. When you find one you can trust, you tend to stick with them. Throughout my sporting life I think I’ve been to just two physios. I’m sure I’ve been to more than that for singular sessions – it’s not like I’ve lack injuries – but I can only really remember two.


The first was a local physio from Trim called Frank Foley. He taught me to walk tall. Literally. I had gone to him when I was around 19 with a golf-related injury. It was golf-related because it happened while my friend and I were walking to the local golf-course. A farmer’s trailed had fish-tailed on the Kildalkey Road leaving the vehicle and trailer prone on a bend. With a few bags of cattle feed in it and an old farmer who was still a little in shock, my friend and I dragged the trailer out of harm’s way and in the process I damaged nerves around my right shoulder. I only noticed the injury several weeks later and deterioration of muscle tissue when my right arm looked significantly shorter than my left when reaching out for a pint! Frank would give me plenty of exercises to get it back to shape but the first thing he showed my still teenage self was not to slouch when I walked. I was losing two inches. It’s funny trying to change your walk. It’s like trying to change how you talk. But it worked and both the shoulder and my gait got immeasurably better. 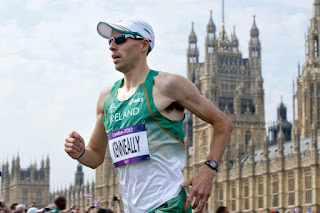 I went to Frank on and off over the years with other injuries but around 2008, now living in Maynooth I changed to the Leinster Sports Clinic and into the care of two physios, Mark and Laura. Both were competent sports people; most Irish physios seem to be. Frank had been part of the legendary Meath All-Ireland winning set up at the end of the eighties and early nineties. Laura was a competent tri-athlete and long distance runner while Mark didn’t look too shabby either. I can remember Mark telling me he had never ran a marathon. His distance was more the 10k mark. I told him that it wasn’t that big of a step-up with training. Of course I didn’t realise that Mark, was Mark Kenneally, who would be become the national 10,000 champion a couple of years later and when he did turn his attention to marathons would run sub 2hr 14 in Rotterdam and represent Ireland at the London 2012 Olympics!


He and Laura were as they say in the back country, horrid nice people and looked after me for years. I followed them to Celbridge when they set up their own clinic but last week I finally realised that taking a spin down to Celbridge, was no longer practical, not with a little girl at home. So I asked the club-mates for someone nearer and McEntee Physios in Navan was one of the first that I got back at me.


I must admit my initial impression was a little uncertain. Their treatment studio was a little small and the physio was of the age that, it being Navan where I teach, might have been a former student. But then the treatment started and any concerns ended there.


After a long description of my sporting history with particular attention to running, the physio Mark went through a plethora of short rubs and exercises before outlining the underlying issues that I have. I’m no scientist but one thing I seemed to gather was that in simple terms your calf (bottom back leg muscles) muscles pop you up and your glutes (big arse muscle) push you forward and that’s kind of how you run. My glutes are weak so when I tire my calf and any other muscle still working are called to help move me forward and this is not good. This is particularly not good when you add it all up for the miles and miles of marathon training that have been layered on past marathons and trainings before that.


So having explained what I was lacking and why I needed it, he went through three key exercises to help fix the calf and work on the glutes. He then videoed me doing them correctly and emailed them to me – technology! And after about 45 minutes I left more knowledgeable and confident in my running than I had been in some while. Carlsberg don’t do running related injuries but if they did, they would do those that are not too severe (touchwood) and which in their treatment help you identify and resolve much bigger issues that if not dealt with would have derailed your running further down the line.

Posted by ronanmoore at 1:51 AM