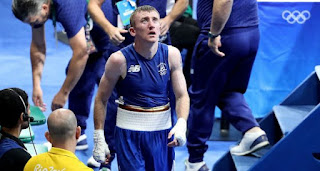 He looked absolutely devastated. One of our most successful Olympians ever, with two consecutive Olympic medals had just been beaten by a Spaniard on a split decision, ten years his younger. Sure he had more national titles under his belt since London 2012 but this was what he had been aiming for over the last few years. Hours, days, weeks and months of training with his sights on gold. And then after 9 minutes, 12 if you include the breaks and the wait for the decision, it was all over.

Disappointment is relative. You don’t lose a match missing a penalty in the semi-final of a local cup final and find immediate relief in the fact that it wasn’t the World Cup. You don’t lip-out on the 18th hole to lose the Captain’s Prize and gain comfort that it isn’t Sunday at Augusta. And you certainly don’t pull up with injury at the beginning of training run and eke solace from the fact it’s not the Olympics.


So, after 3 minutes 34 seconds into my warm-up yesterday evening, when I pulled up with wincing pain in my calf again, unable to continue at the slowest of jogs and only capable of hobbling home I had a Paddy Barnes moment.


All I could think of was the 5k I wouldn’t race in my parent’s home county that week; the hours, weeks and couple of months of preparatory training I had already done and how they now seemed undone; the unknowing of recovery; and how Dublin and that elusive 3 hr mark in October seemed as far as ever. Devastating, I felt thoroughly dejected.


But, after a while, things find some perspective. No one died. The world hadn’t stopped spinning. I still have a beautiful family. And my baby girl smiles when she wakes in the morning. And maybe I can come back from this.