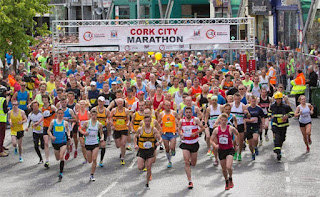 In the end it wasn’t the “driving the porcelain bus” au natural that did it for me. Nor was it the losing of 5 seconds a kilometre having miscalculated my run that did it for me. In fact that probably ensured I didn’t blow up sooner than I did. In the end I just didn’t have it in the legs.


While I had trained, I probably hadn’t quite trained enough or with enough quality.


With about 8 kilometres to go, as I turned onto the Model Farm Road I knew I was beginning to struggle. 21 miles gone, 5 miles left I remember feeling the pinch and realising not only would I not catch up with the 3 hr marker I would do well to hang in where I was. A small respite came when I turned right for the Orchards and ran down to the Lee with the belief that from now on in it was homeward bound. That respite was quickly torpedoed due to two reasons:


1.      The Carrigaline Road. A name most non-Corkonians are only familiar with due to the occasional traffic-jams that AA road watch alert us to in the morning. However to non-Corkonian Cork marathon runners it quickly takes on much greater significance when its at least one-mile length stretches ahead. As I straightened up and saw just how long the next stretch would be, my will died that little bit more.


2.      A Green Giant. Not literally but at 6 ft plus and decked this was a runner decked in green who seemed to shadow me for 2 miles that felt like 20. Young, carefree and running with abandon I met him around the 21 mile marker. He was hard to miss in a jersey that screamed grass and with elbows and arms that looked like some medieval wagon wheel form of attack spinning wildly alongside him. As I gained on him (as he slowed) I made to push past only for him to decide this was a perfect opportunity to latch on to someone and pace himself. Now don’t get me wrong, he seemed friendly and was probably a hell of a nice guy but no I couldn’t get rid of him, either speeding up or slowing down. All I could do was try to keep away from his arms and elbows. Something that was more difficult than you’d expect 23 miles in and along a main thoroughfare. In the end, with a few miles to go, and with more in the bag than me he wished me well and set off for home.


As for me, well I suffered and survived the Carrigaline Road and when I turned in and hit Fitzgerald Park I knew that while I would not break 3 hours, my pace had steadied and I would at least get a PB, even being able to kick at the very end for the last 100.


And who was the first person to welcome me home? The Green Giant. Like I said, a hell of a nice guy.


In total with warm up and downs, 16 k. Feeling good (within reason).

Posted by ronanmoore at 2:15 PM