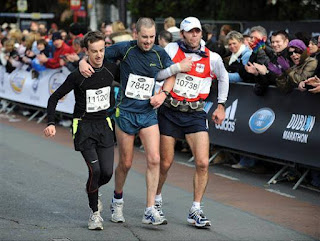 So that photo and what really happened.


It is important to view my version of events through an eight-year lens and having occurred at 26 miles, when your recollection would never stand up to the scrutiny of a court a law.


In my version it was the 2008 Dublin Marathon and I was running just one month after my first “proper” marathon in Berlin. No need to digress into the reasons for this but suffice it to say, because I was only a month past my last 26.2 jaunt I took it much easier in Dublin and as a result, come 26 miles, I actually felt pretty good (for ‘pretty good’ read ‘I wasn’t dying on my feet’). As I closed in on the finish I could see a figure in front of me visibly slowing.


So, for the first and only time in my running career, I roared encouragement and egged him on for the final few moments. He seemed to respond and together we kicked for home. Unfortunately, I kind of under-estimated how far home really was! We were on Nassau Street coming up to the bottom of Kildare Street and a 100 metres later we were still on Nassau St and for another 100 metres after that too!


Then as we finally rounded the final bend in the corner of my eye I could see the outline of my new found running friend just fall away to my right. Literally fall away! As his legs seemed to slump from under him! 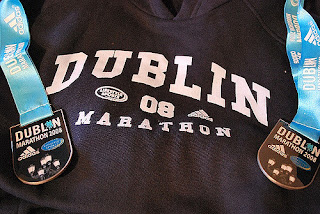 Having felt responsible for getting him to kick a half kilometre out I now felt I owed it to him to help him up. As I bent down a Spanish looking figure came alongside and together we made it the final ‘proper’ 100 metres and there our paths diverged. A year later we all appeared in the 2009 Marathon Guide and I discovered the guy who came to our aid was not Spanish but from Tyrone (naturally) and the guy who I encouraged to kick a long way from home was a Dub.


For a while if you Googled my name the first image that came up was this one, which would have been great had I been applying for a new job. After a while that marathon faded away, other marathons came up, I didn’t cause anyone else to fall over and the first Ronan Moore on Google became a 6 year-old boxer.


I’d ran Dublin once before 2008 and once since. This will be by 4th ‘Friendly Marathon’, I don’t plan on encouraging anyone to kick a mile from home and I will definitely not be wearing what looks like lycra!


Slow run - 30 mins - with 10 x 100 to finish.
Today ahead of the forecast rain a slow 30 minute run around the town fields with 10 x 100 metre strides to finish. It should have been just 8 but I forgot the plan and did 10. I also forgot to get milk but that was just the shopping and not part of the training.

Posted by ronanmoore at 9:29 AM