Standing in a t-shirt and a pair of shorts with the sun peeping out through the morning clouds you could almost kid yourself into believing it was the break of dawn of a mid-summer’s day. There was a little bit of a chill in the air but other than that it was bright, dry and windless. Mad to think that it was in fact a quarter past nine on New Year’s Eve!

Waiting for some friends to come on down for my week’s long run I found myself not only looking back at what was an up and down but ultimately very rewarding year’s running but also a Christmas festive season safely negotiated. With only a few social New Year’s drinks to come this evening I had managed to dodge the festive bullets of too much food and drink and not enough runs. I had eaten, drank and been merry (if not intoxicated much) yet had still gotten out for a decent slice of training. If you managed to do the same or something similar, fair play. You’ve know reaching the half-way point with the Trim 10 Miler now in sight. 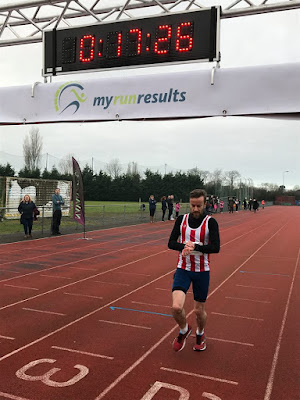 Sometimes successful training can hinge on a few factors outside your control. You may come down with a bug that knocks the stuffing out of you or you might have a wedding that sandwiches Christmas Day turkey with New Year’s Eve drinks meaning going out training is next near impossible. Encouraging training buddies might be away for the festive season or the weather can turn into an absolute beast. For me I couldn’t have asked for more. The weather became mild once again. Friends hung around that I could meet up with and there was surprisingly a dearth of weddings and winter bugs. When you add in the fact that I teach and am off longer than many of my mates, I couldn’t really ask for better.

In the end I had a great old week’s running. My first run of the week, a Tuesday tough one in a local 5k race, saw me break a PB for the distance! The race, the Navan Athletic Robbie Byrne 5k was one of a myriad of Christmas outings that offered the opportunity to do a fast run in the company of others. On yet another fine December morning I found myself tracking a student of mine the whole way round. While this might sound suspect it wasn’t and by managing to never lose him completely I ended up running in 7th in a time of 17.26. Goes to show what waking up half a dozen times before 4 o’clock by the 15-month old can do for you!

This was then followed by another tough Thursday session on another mild, dry day where I led out some students of mine who I train/organise the buses for. And finally I capped this with a final local long run out New Year’s Eve with old friends making this possibly the best week’s training this winter. Go figure. This probably won’t last but for now I’m happy to bank the mileage and look forward to week 6 and 2017.

Posted by ronanmoore at 9:32 AM