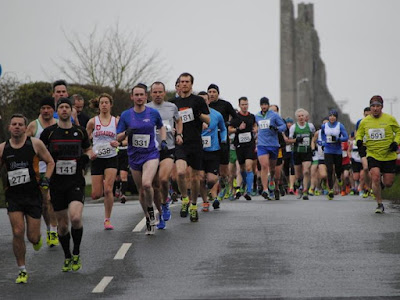 As the weeks tick by the Trim 10 Mile begins to loom large. This week after a tough, tough session on Tuesday where I completed 10 x 4 mins at 10k pace with 1 minute jogging rest in between and a light 5k with a mate along the banks of the Boyne Saturday morning, I decided I’d jog the 10 mile loop for my long run.

So for this week’s entry I’d thought I’d give you a sense of what to expect.

The start of the ten-mile is nestled into the Athboy Road side of Oakstown Business Park just outside Gerry Ellis’ friendly shop. Having warmed up jogging down from wherever in town you might have parked and finished with strides from AB Hire (good for coal) to SmartParts (good for car parts) you will be ready to go.

From the gun, you hit the Athboy Road and take an immediate left. Then after a short rise up you will have a nice slope down towards Lidl before the road turns left and you head off out into the countryside. With the hill and the cheers of local residents encouraging you on it is easy to hare off too fast. Resist the urge. You will regret it later. After a kilometre you pass by what will be the final stretch on the way back. Fifty metres later the road forks and you swing right and away into proper Meath country and the first mile-marker.

The second mile sees you continue to roll on out through Clonbun in what could be considered section one of three. As you approach the first short climb leading you into the wooded area of Carrollstown you should hopefully be starting to settle into the race at a nice pace that has allowed the body to warm right up.

With this section generally well-favoured towards the prevailing wind, as you pass by the Woodbine Cottages on your left and the townland of Cooltrim (what a name!) the third mile should be where you begin to really enjoy the race. For those urban dwellers among you, don’t forget to smell that fresh country air and to take in those first early green shoots of spring. I can promise you, you won’t be doing that at Mile 9!

As you enter mile 4 it is eyes on the road time as you hit a few blind corners. With the road being well-marshalled you won’t have to worry but all the same make sure to stay on the right on your way round. As you reach the end of this mile you will hit the rise that brings you into Dunderry. I once did my gear-box here and ended up having to coast into town parking up at the church. But don’t worry, that says far more about the state of my car than it does about this little incline.

No sooner do you enter the village of Dunderry (Meath Senior Football Champions 1995, y’up yur boyo!)  then you swing a sharp left and head out of it. Dunderry, is a strong-knit community and very welcoming so don’t worry if you catch a glimpse of what looks like a body hung from a lamp-pole, that’ll be a scare-crow with their village colours of black and white. Either that of a Saturday night reveller from Horan’s sleeping it off.

Once out of Dunderry you will now start the second section, effectively the shortest side of what is a three-sided triangle, as opposed to the four-sided triangles found elsewhere in Meath. This section can sometimes be directly into the prevailing wind so finding shelter close the hedge-rows or behind really tall-runners might not be a bad idea if a breeze is up. Sometimes this can be the toughest part, not helped by the first of two light but longish inclines. Just keep persevering. Remember, there is a graveyard just up ahead!

While a graveyard might not be the most inspirational of sights mid-race, this old ‘reilig’ is a welcome landmark, because when you pass this, you have 8 and a half k complete and are now well over half-way done. Use this mental plus to help you up the second incline of this section. If you can get past this one, then soon after you’ll hit a sharp left and aim for home.

Though only a couple hundred metres will see you finished mile 6 don’t take off just yet. The finish line is still a bit away. A few nice stretches followed by another little incline will see you through the townland of Cannistown and then into the outskirts of Kilbride. You will know you have reached the outskirts of Kilbride both due to the 7-mile marker and also by the fact that houses are almost built right beside each other!

Heading through down-town Kilbride (the church and school) if you are feeling good and there is no wind or it is only coming cross from your right you might like to push on, beginning with this nice straight-stretch out of the village. If however, you are starting to feel the burn a little too much then I would hold off a while and wait a few more kilometres before a final up in pace. Instead keep the legs moving as you follow the road round left and then back into the lightly curving country roads.

At mile 8 you are not far from home but there will still be two small inclines waiting for you so watch out. The first is in the middle of mile 9 while the second and slightly more ‘bite-ier’ is near the start of mile 10. Get through this one and you are nearly home and hosed.

Once past mile 9 look to Trim in front and right and the sight of the medieval Yellow Steeple calling you home. Once you see that you are nearly there. As soon as you spot it after one last short stretch you will reach the fork in the road last seen in Mile 1. From here you can start to open up the throttle knowing that you have succeeded. The winter training has paid off. Fifty odd metres and you swing right into the business park once more and the final straight. Increase the speed and as soon as you can read the race clock and the finish line, wipe the face for those end of race photos and empty the tank on the sprint home.

You’ve made it. Well done.

Of course, that’s still a few weeks away! In the mean-time we still have this week to think about:)!

Posted by ronanmoore at 1:15 PM