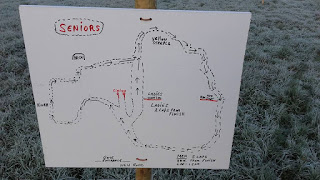 So training was tough last week. Part of this was because we’ve entered the staff night and ‘Christmas Season’ season! A place where intervals and long runs do battle with office parties and burgeoning lunches. It will be hard for everyone, but persevere!

For me the training week ultimately proved rewarding. That’s the thing about tough weeks; the tougher they are the more rewarding they prove. The more you give, the more you get back.

Tuesday I did my hardt session but my lateness (a characteristic that seems to define me these days) meant that by the time I arrived down, the lads had already completed 9 of their 10 reps. As a result having met them on my third run I only got to do one more in their company before I was on my own. Doing intervals on your own isn’t fun. It’s far from fun. It’s damn hard so it is. It’s the type of training that’ll put hairs on your chest my father would probably tell you. While I can neither confirm nor refute this, I certainly would say that it does make you stronger, physically and mentally.

Physically there is nothing better than intervals to push the ceiling upwards. In effect this training will allow you to run faster for longer. Mentally, running intervals on your own will harden you up, as long as you can complete the set. At number 6 (of 10) I was getting tired and cursed my lateness. At 7, I kind of thought that 8 would be plenty. At 8 though I thought I’d do this and then decide. At 9 I told myself that this would be the hardest one to sustain if I did it. And then at 10 I smiled, gritted my teeth and was thankful that was now the last.

Thursday was a light session of no more than 30 minutes, up and back from my parent’s place while they took on child-minding duties.

And then Saturday was my long(ish) one. However it was also the Meath Cross Country Championship Day so my long(ish) one was also going to be another tough one with a good dose of hills. 5 miles – 8 km – even if my watch read a little more on finishing. And all of it a hard slog up hills, down hills, along riverbanks, around steeples, through gates and beside ditches. The weather was beautiful, the scenery stunning, the going soft and the running hard. You don’t get many better courses. Although I must add, being my first cross-country race since I was probably 15 means I am not the best judge.

Usually at the end of races you don’t want to leave anything on the course. Saturday though I made an exception, I did leave something on the course (or at least just a little bit off it). Thankfully the early week rain should have washed it away by now! As for the time, I was delighted to come in feeling strong, though fecked in a time of 31 mins 29 seconds.

Not only was it a good boost to see I hadn’t lost much since October’s marathon it also meant that when I re-entered Christmas party season later that evening I did so guilt-free.

So this week’s training, and apologies if you have already kicked off is:

Thanks Ciaran for the photo.

Posted by ronanmoore at 1:13 PM