So how did that go?

So, the first week of training. Did it all go to plan? Did you manage to make it out all three days as planned? Did you make use of the cold but dry weather to take to the paths and the trails, to blow out the cobwebs and get back up and running? If you did, well done, you’re flying. If you didn’t then don’t worry, join the club!

I started on Tuesday all bright and ambitious. I hadn’t really run since I finished the marathon last month. Part resting on my laurels due to it being the only marathon I’ve ever finished well and part due to a dose I picked up with half the rest of the country I had really taken things easy. But now I was ready. 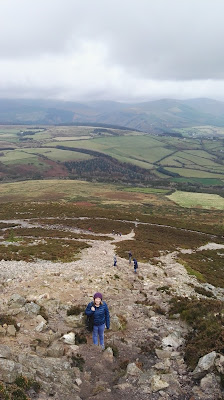 So I took to the paths on Tuesday night and started my training with the interval session that was the tough Thursday session similar to that suggested last weekend. However instead of doing 4 minute intervals I did 3 minute intervals with a minute jogging recovery and did seven and a half of these because I was a little late. Despite the lay-off the legs held up and in the company of the friends from the club we paced up and down the outlying roads around Trim. It was a good start. And then I hit a speed-bump.

Thursday was the next day I was due out but I remembered I had arranged to go out for dinner and a film with my wonderful wife, and considering I had spent the best part of 4 months on every sort of run leading up to the marathon I was not going to call time on this. Then Friday was a retirement of an old friend. Saturday we had a family day out down in Wicklow and Sunday I spent laying paving slabs. Now, while I might say climbing the Sugar Loaf was a long run of sorts except a lot slower and lifting paving slabs was core work, one thing is for sure, it wasn’t real running.

There are weeks like this when it just doesn’t happen for you. You don’t get out due to illness, due to tiredness, due to weather, due to family commitments, due to paving slabs! But whatever the setback don’t mind it. It is a speed-bump along a season and a distant memory come race-day. It’s like what they say about pain, it is in the past. Move on and good luck with this week.

* A tempo run is where you run at a strong pace usually similar to what you might expect to run in a race. More on tempo mid-week.

Posted by ronanmoore at 9:11 AM